This is the ARCHIVED WEBSITE for the 2011 Africa in Motion Film Festival.               For up-to-date information visit: www.africa-in-motion.org.uk

To watch trailers, clips, interviews, shorts and documentaries from the festival check out the AiM TV channel.
(hosted by Ethical TV)

"Thanks for putting together such a wonderful symposium and film festival. You successfully assembled a very interesting cross section of papers. The short film selection was also outstanding! It was a real pleasure to participate."

Africa in Motion is a largely volunteer-run festival, founded in 2006 by good friends Lizelle Bisschoff and Melissa Trachtenberg. At the time, Lizelle had just commenced with a PhD in African cinema, and quickly came to realise how difficult it is to access African films. Not wanting to keep her research to the academic realm only, she founded the Africa in Motion film festival alongside Melissa in order to create more opportunities for Scottish audiences to see African films and to provide a platform to African filmmakers to exhibit their work in Scotland. 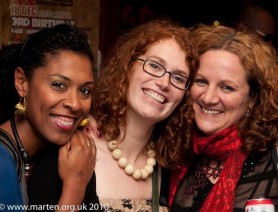 The main aims of the festival have been, since its inception, to introduce Scottish audiences to the brilliance of African cinema and to overcome the under-representation and marginalisation of African film in British film-going culture. We believe that the best way to learn about Africa is to listen to African voices and to view representations created by African themselves, as these often counter the stereotypical representations we see from Africa in mainstream media in the West. But our main reason for screening the films is because we believe they are great films which should be seen the world over. Our audiences agree with us – we are proud that our audiences have grown from around 1,300 people in 2006 to over 3,000 people in 2010!

Thank you also to all the volunteers who come on board just before and during the festival!

AiM Board of Advisors

Andrew Lawrence – Honorary Fellow at the University of Vienna